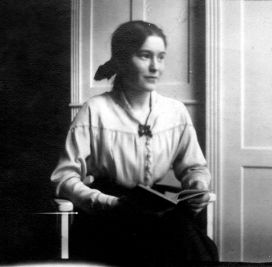 Anna Seghers was born as Netti Reiling on 19 November 1900 in Mainz. She studied philology, history, sinology and art history in Cologne and Heidelberg, where she presented her doctoral thesis. In 1925, then married to László Radványi, she moved to Berlin. Their two children Peter and Ruth were born in Germany’s capital city. Here, she also made her breakthrough as a writer with her short story Grubetsch (1927) and the novella Aufstand der Fischer von St. Barbara (1928 The Revolt of the  Fishermen), which both won the Kleist Prize the year they were published. In 1933, Seghers and her family had to flee Germany to escape persecution by the Nazi regime. In May 1933, her books were among those burnt by the Nazis on Opernplatz in Berlin. The crucial phase of her life as a writer was shaped by her life in exile. In Paris she wrote her novel Das siebte Kreuz (1942, The Seventh Cross) and began with Transit (1944, Transit Visa). Leaving Paris on a dangerous and adventurous escape in spring 1941 to the unoccupied south of France, she fled on to reach Mexico. During the six years she lived there as an émigré she wrote the autobiographical story Der Ausflug der toten Mädchen (1946 The Excursion of the Dead Girls).

After returning to Germany in spring 1947, Anna Seghers was active in the Kulturbund zur demokratischen Erneuerung Deutschland, the Deutscher Schriftstellerverband (DSV), as well as the Deutsche Akademie der Künste, newly founded in 1950. From 1952 – 1978, she was also president of the DSV after it separated from the Kulturbund. On the international stage, the World Peace movement was a cause close to her heart. In 1950, through this commitment, she was one initiator of the Stockholm Appeal for an absolute ban on nuclear weapons. The new model of a society promised by the GDR seemed to fulfil the ideals of her youth, and allowed her to hope for greater social justice. In the 1960s, her advocacy of publishing Franz Kafka’s works in the GDR was indicative of her constant desire to support diversity in aesthetic and artistic views. On the occasion of her 75th birthday on 19 November 1975, she was made an honorary citizen of the city of Berlin, and in 1981 became an honorary citizen of Mainz, the town where she was born. Anna Seghers died on 1 June 1983 in Berlin. The most important awards she received during her lifetime include the Georg Büchner Prize, which she won in 1947, directly after her return from exile.

Anna Seghers left her artistic estate to the Akademie der Künste, where it is administered in the Anna Seghers Archive. She is buried on the Dorotheenstadt Cemetery in Berlin-Mitte.