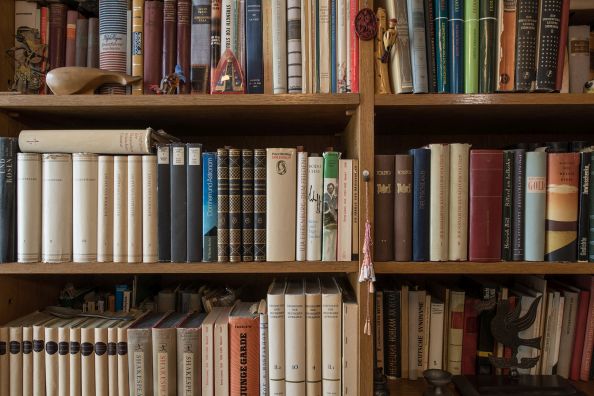 Bookshelves in the Anna Seghers Museum

Aside from her nine major novels, including Das siebte Kreuz (1942, The Seventh Cross), Transit (1944, Transit Visa) and Die Toten bleiben jung (1949, The Dead Stay Young), Anna Seghers wrote over sixty novellas and stories, including the Karibische Geschichten cycle (1962, Caribbean Tales, previously individual novellas), Die Kraft der Schwachen (1965, The Power of the Weak), Sonderbare Begegnungen (1973, Strange Encounters) and Drei Frauen aus Haiti (1980, Three Women from Haiti). Her style was always sober and unsentimental, yet sometimes she left the realm of realistic narrative to include mythical and fanciful elements in her literary cosmos, as in her early work Die Legende von der Reue des Bischofs Jehan d’Aigremont von St. Anne in Rouen (1924/1925, The Legend of the Penitence of Bishop Jehan dÁigremont of St. Anne in Rouen, first published in 2003 from her personal papers), Die Toten auf der Insel Djal (1924, The Dead of the Island of Djal), Sagen von Artemis (1937/38, Legends about Artemis), and Das Argonautenschiff (1948/49, The Ship of the Argonauts). In her novella Die Reisebegegnung (1970), where she describes a fictional conversation between E.T.A. Hoffmann, Nikolai Gogol and Franz Kafka in a Prague coffee house, she shows programmatically – just as in her story Das wirkliche Blau (1967, The Real Blue) – that art and literature create their own reality where fantasy, dreams, and the unconscious also have their place – and hence she departs from the ideal of socialist realism propagated in the GDR. Anna Seghers always had a highly-developed sense for what was historically and socio-critically relevant – evident, for instance, in her Vaterlandsliebe speech (in Paris in 1935 at the International Congress for the Defence of Culture), Frauen und Kinder in der Emigration (c. 1938, first printed in 1985), her essay Glauben an Irdisches (1969, Faith in the Terrestrial) as well her writings on Tolstoy and Dostoevsky.

The reception of her works in West Germany was often hesitant; in East Germany, they often met with universal acclaim. In both cases, she was usually reduced, with the corresponding evaluation, to Das siebte Kreuz and an author following the official party line. In West and East Germany, it was much simpler not to have to look at the contradictions in Anna Seghers’ life and work. Yet such an approach did not do justice to her oeuvre’s complexity.

Today, Anna Seghers is regarded as one of the leading twentieth century German-language writers. Playwrights such as Heiner Müller or Volker Braun have adapted the themes of her stories for their own pieces, e.g., Müller’s inspiration for his play Der Auftrag (1979, The Mission) came from Seghers’ short story Das Licht auf dem Galgen (1961, The Light on the Gallows), while Volker Braun took Seghers’ novel as the basis for his Transit Europa (1988). Hans Werner Henze’s choral symphony Sinfonia N. 9 (1997) has a text by Hans-Ulrich Treichel inspired by Anna Seghers’ novel Das siebte Kreuz (The Seventh Cross). Anna Seghers’ works have been translated worldwide into 42 languages. Many of them have also been filmed.

The non-profit Anna-Seghers-Gesellschaft Berlin und Mainz has over 230 members from 14 countries, including renowned literary scholars from France, the USA and China. This literary society publishes the Argonautenschiff yearbook.

In accordance with Anna Seghers’ wishes, a Foundation was established so the royalties from her work could be used to support young writers through an annual Anna-Seghers-Preis. The prize is awarded to German-speaking or Latin-American authors on an alternating basis.

Since 2000, Aufbau Verlag Berlin, with editors Helen Fehervary and Bernhard Spies, has been publishing a critical, annotated edition of her works.